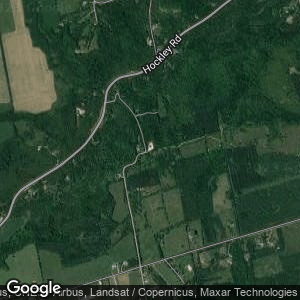 Notice: All Scouts Canada camps are temporarily closed due to COVID-19.

The camp is in the Hockley Valley just east of Orangeville. A variety of cabins, campsites, and program facilities are maintained to support Scouting's outdoor emphasis. Sixty-eight acres of land were purchased in 1946 by the then Goodyear Tire and Rubber Company (now Goodyear Canada Inc.) in memory of its employees who died in World War II. The property was donated to the Lakeshore District. In 1957, Lakeshore District became part of the Greater Toronto Council. The remaining 189 acres of property were purchased in 1968. Mississauga Region leased the camp for several years and then purchased it from GTR in 1985. On amalgamation in 1997, Goodyear became the Regional Camp of the new Central Escarpment Region.

As of January, 2015, the camp is "unavailable for use until further notice" "due to some recent and unforeseeable circumstances", according to the camp web site.